The u11 mixed basketball competition took place last Sunday January 21st in Gurteen. There were 5 teams in the competition. Kilrush had a decisive win over Quin/Clooney in the Preliminary game 14:0, Doorabarefield beat Cooraclare/Cree B 14:5 in the first semifinal in a very exciting game and Cooraclare/Cree A beat Kilrush 10 :7 in avery close thrilling game. There was another nail biting game for the 3rd & 4th place playoffs with Kilrush against Cooraclare/Cree B and kilrush winning 5:4. The final was also a very exciting game going tit for tat over the first three quarters but then Cooraclare /Cree A pulled a away with a decisive victory over Doorabarefield 22:14. 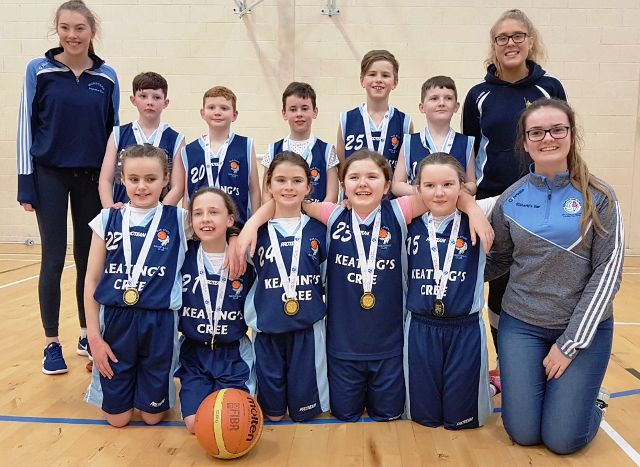 The boys U16 basketball took place in Gurteen on Sunday 7th January. There were three teams participating in the competition: Doora/barefield, Cooraclare/Cree & Clarecastle/Ballyea.

The competition was run off in Round Robin format with all teams playing each other. Doora/barefield proved too strong for both of their opponents having two very impressive wins and going on to take gold medals and they will now represent Clare in the Munster Finals at the end of April. Cooraclare won their game against Clarecastle/ Ballyea taking silver medals thus Clarecastle / Ballyea taking home bronze medals.

The St Francis Credit Union Clare Community Games Girls U16 Basketball competition took place in the beautiful venue in Gurteen on Sunday14th January. In the semi finals Cooraclare/Cree beat Doora/Barefield and Kilrush beat Quin Clooney. Neighbours Doora/Barefield and Quin/Clooney battled it out for the Bronze medals. Doora/Barefield were the winners with Quin/Clooney taking 4th place medals. The final was a brilliant matcvh between Kilrush & Cooraclare/Cree. They were evenly matched teams but Cooraclare/Cree proved the stronger in the end. They now go on to represent Clare in the Munster finals in U.L. in April. The competition was coordinated by Jacinta McEvoy with referees Tom Frain, Eoghan Mooney & Elaine