The Golden Vale Fresh Milk Clare Community Games County Draughts finals took place in Tulla on 20 Feb 2010. The number of entries was down on previous years, but the competition was fierce! As usual, Tulla Community Games crew were fantastic hosts.

Congratulations to the Tulla Under 12 Draughts team who secured Silver medals at the National HSE Community Games Finals in Athlone at the weekend (28-30th May).

The hosts, Tulla, took a clean sweep in the Golden Vale Milk Clare Community Games draughts competition this Sunday 27 February. Best of luck to Tulla in the Munsters. 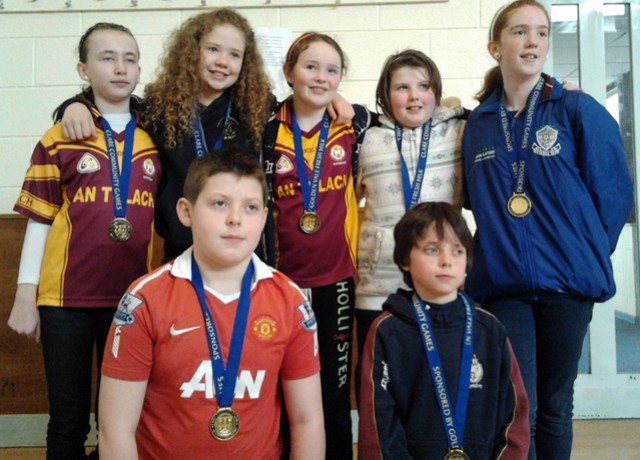 The Golden Vale Milk Clare Community Games Draughts competition took place in Tulla on Saturday 25th Feb. As usual, the competition was very well organised by Tulla Community Games.  Although there weren't as many entries as previous years, there were some very close matches fought.  Well done to Tulla who managed, just, to secure Gold in all three categories.

The MUNSTERGROUP Clare Community Games Draughts competitions for U-10 & U-12 & U14 took place on Saturday 23rd Feb in St Joseph’s Secondary School, Tulla.  The Co-ordinator was Sean McNamara with the support of all the Tulla Community Games committee and Score keepers Aine O’Callaghan & Kevin McSweeney.  The standard in these competitions were extremely high with some of the matches finishing all level with an extra round of games to decide the winners. This is the first time in twenty-five years that Sixmilebridge/Kilmurry were not represented in any of the categories. In the U-10 competition only three teams took part.  Tulla beat An Droichead to progress to the final where they beat Quin/Clooney 15 – 5. In the U-12 competition six teams took part.  In the first round Inch/Kilmaley/Connolly beat Quin/Clooney & Ennis St Johns beat An Droichead A.In the semi-finals Ennis St Johns beat Inch/Kilmaley/Connolly and Tulla beat An Droichead B.  An Droichead won the bronze medals from Inch/Kilmaley/Connolly by the narrowest of margins when it was all down to last game as to who would win.  In the final Tulla & Ennis St were level on ten pts each so they had to play one game each to decide the winners it finshed 7 -3 to Ennis St Johns after some extremely close games. In the U-14 Ennis St Josephs qualified for Munster unopposed.  Ennis & Tulla will represent Clare in the Munster finals in Tralee on 30th March.