The St Francis Credit Union Clare Community Games Boys U10 & U13 Indoor Soccer competitions came to a conclusion last weekend, 24/25 February. Due to the large volume of entries the competition took three days to run off. The standard was extremely high with a number of the matches going to extra time & penalty shoe out. It was coordinated by Flan Brennan with assistance from Mark Nestor in Corofin GAA Hall. Ballynacally/Lissycasey won the double they now have the honour to represent Clare in the Munster Finals on 21st April in U.L.

The St Francis Credit Union Clare Community Games Indoor Soccer competitions for U10 & U13 Girls took place over the weekend in Corofin GAA Hall. The Co Ordinator was Flan Brennan assisted by Mark Nestor and a number of referees. The U13 competition was on Saturday with the U10's on Sunday. The winning team in each will go forward to represent Clare in the Munster finals to be held in U.L. on 21st April. 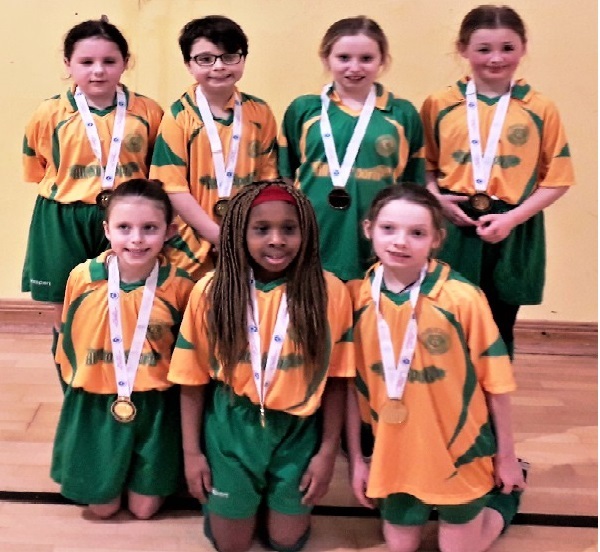 In the U13 semi finals Inagh/Kilnamona (Green) went down to Corofin/Kilnaboy 8 – 0 while Ballynacally/Lissycasey (Black) beat Moylussa (1) 4 – 3. Inagh/Kilnamona played Moylussa for 3rd & 4th placings. At full time the score was 7 – 7. Moylussa won on sudden death penalties. The final was a very close encounter with Ballynacally/Lissycasey narrowly beating Corofin/Kilnaboy 2 – 1.

In the final Ennis St Johns were the stronger team & beat Moylussa "A" for the Gold & a chance to represent Clare in the Munster finals in April.

In the U13 competition nine teams participated. The standard was very high with some matches going to extra time to be decided.

Corofin/Kilnaboy & Lisdoonvarna/Doolin/ Kilfenora/Kilshanny were level at full time with the Lisdoonvarna girls coming out on top after extra time 4 – 1. Ennis St Johns met near neighbours Doora/Barefield this also went to extra time with Doora/Barefield winning 4 – 2. Clarecastle/Ballyea went down to Moylussa "A" 3 – 1. Ballynacally/Lissycasey beat Moylussa "B" 7 – 1. Cooraclare/Cree beat Moylussa "A" 2 – 1.

The Play off for 3rd & 4th was a very close encounter with Ballynacally/Lissycasey & Doora/Barefield finishing 2 – 2 at full time. The Ballynacally girls went on to win after extra time and penalties.

Lisdoonvarna/Doolin/Kilfenora/Kilshanny and Cooraclare/Cree met in the final with Lisdoonvarna coming out as winners and will now represent Clare in the Munster Finals in U.L. in April.