The St Francis Credit Union Clare Community Games Outdoor Soccer competitions for boys and girls U12 and girls U15 were held between 11-15th June in O'Sullivan Park, Lees Road. While the number of teams participating was low the standard was extremely high with some matches being decided after extra time and penalties. It was coordinated by Flan Brennan, with assistance from Mark Nestor, ably assisted by a team of referees. The first in each category now go forward to represent Clare in the Munster finals in July. 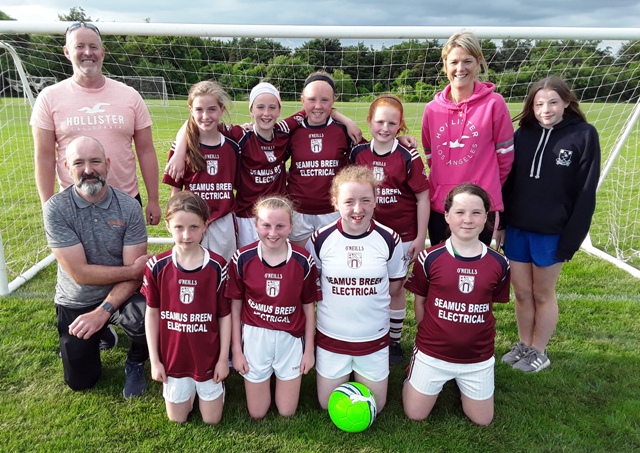 In the U12 girls five teams participated. Doora/Barefield beat Moylussa 5 – 0 in Preliminary round they then beat Cooraclare/Cree 2 – 1 in the semi final. Inch/Kilmaley/Connolly beat Sixmilebridge/Kilmurry 2 – 1 in semi final. In the playoff Cooraclare/Cree beat Sixmilebridge/Kilmurry for the bronze medals. Doora/Barefield proved the much stronger in the final beating Inch/Kilmaley/Connolly 5 – 0.

In the girls U15 four teams participated. In the semmi final Sixmilebridge/Kilmurry beat Lisdoonvarna/Doolin/Kilfenora/Kilshanny 2 – 1 while Ennis St Johns beat Cooraclare/Cree 3 – 0. In the play off for third place the Lisdoonvarna and Cooraclare sides were level at full time and after extra time Lisdoonvarna won out on penalties 2 – 1. The final was a tough encounter between Ennis St Johns and Sixmilebridge/Kilmurry with the Ennis girls winning 2 – 0.

In the boys U12 competition eight teams were registered. In the preliminary round Meelick/Coonagh were beaten by a much stronger Doora/Barefield while Moylussa got a walk over from Lisdoonvarna/Doolin/Kilfenora/Kilshanny (Red). The quarte finals were very close encounters with the Ballynacally/Lissycas and Cratloe 1 – 1 at full time Ballynacally won 4 – 2 on Penalties. Sixmilebridge/Kilmurry beat Cooraclare/Cree 1 – 0. Quin/Clooney and Moylussa were 0 – 0 at full time with Quin winning 2 – 0 after extra time. Doora/Barefield beat Lisdoonvaarna/Doolin/ Kilfenora/Kilshanny 1 – 0.

In the semi finals Ballynacally/Lissycasey beat Sixmilebridge/Kilmurry by the narrowest of margins 3 – 2 after extra time and penalties. Doora/Barefield beat Quin/Clooney 2 – 1. In the play off Sixmilebridge beat Quin for the bronze medals. The final Doora/Barefield were the much stronger side coming out 3 – 0 winners over Ballynacally/Lissycasey.